Chances are, you read the last part of that title in Shia LaBeouf’s screaming voice. And if you’re wondering why someone would do that, it won’t be long before you learn why and find yourself doing the same thing. A video of the actor’s intense — and very bizarre — motivational speech went viral over the span of a few weeks in early June, leading to an explosion of memes, mashups, gifs and remixes that grew just as popular as the video itself.

As with any viral sensation, social sharing mediums like Reddit and BuzzFeed caught on and shared the video, originally posted on Vimeo, for the rest of the world to watch with hilarious confusion. Shia roars into the camera, “DO IT. Just DO IT! Don’t let your dreams be dreams. Yesterday you said tomorrow. So just DO IT!” all while squatting down in some kind of fitful Dragon Ball-Z-esque fighting pose and making angry hand gestures to the point where you think he’ll combust. You don’t know if you should fall to the floor in a fit of laughter or actually heed his advice. It is that absurd. And the best part of the video? Shia’s rant was filmed in front of a green screen, prompting internet trolls and skilled video editors alike to take the opportunity and run with it. As a glorious result, parodies galore popped up right and left, transforming Shia’s speech into everything from a Ted talk to a full-blown Star Wars hologram. It was even mashed up with the Internet black hole we all get sucked into otherwise known as — yup, you guessed it — cat videos.
See also: New to Newshosting? Sign up for our VPN and Usenet plans today!

While the viral video may appear absolutely random and ridiculous in typical Shia fashion, the backstory to it explains that it was quite the opposite.

Here’s the deal: the video is actually part of a series of 35 other videos — all featuring Shia — for an art project called #Introductions for Central Saint Martins, a London arts college. So while many think this is just another good ole’ weird Shia stunt, he’s just doing what we originally knew him for: acting. This speech was completely scripted and performed, and the abstract oddity of it all is simply (what else?) a form of art. This isn’t the first time the actor has found himself as the center of an artistic project. Remember his notorious red-carpet appearance wearing a paper bag over his head scrawled with the words, “I am not famous anymore”? That was the work of the same artists behind this video, Luke Turner and Nastja Säde Rönkkö. And as it turns out, there’s a reason for the actor being filmed in front of the greenscreen — the artists purposely made the background alterable and released it with a Creative Commons license, meaning anyone can do as they please with it for non-commercial purposes. Judging by the ridiculous number of parodies that came about from this, you can just imagine the Internet’s gratitude for that.

As with any online sensation, the peak of this video’s popularity has nearly fizzled out, slowly being replaced by the next up-and-coming throng of viral videos. There’s no doubt, though, that it won’t be long until the Internet is graced once again by another stunt from the always entertaining Mr. LaBeouf, rattail and all. But until then, enjoy this lovely scenery made entirely of Shias. You’re welcome. 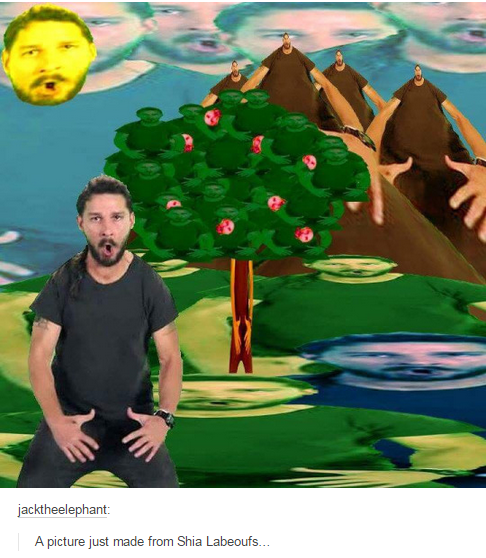 Do you have a favorite “Just Do It” parody? Post the video in the comment section below!